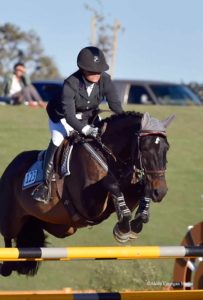 Maja Lindemann was born and raised in Southern California. She started riding in Sweden at the age of five. She grew up riding with Far West Farms, the Karazissis family. As a junior she competed in Pony Finals three times, junior hunters and children’s jumpers. She taught all through high school in Far West’s lesson program. In 2000 she moved north to attend UC Davis, where she graduated with a B.S. in Animal Science specializing in Equine studies. While in college, she competed for the equestrian team, making it to Regional and Zone competitions. She served as Vice President and President of the team and eventually went on to coach the team. After graduating in 2005, Maja turned professional. Since turning professional she has competed up to the Grand Prix level of showjumping as well as competing in hunter derbies and everything in between. She loves to teach every level from beginners up through the ranks. Her calm, positive demeanor while teaching makes her a match for all types of students.